April 3, 2017 – The University of Michigan’s Division of Public Safety and Security (DPSS) will host and participate in a number of activities during the month of April to raise awareness about sexual violence prevention and response in recognition of National Sexual Assault Awareness Month (SAAM).

A highlight of this month’s activities is the University of Michigan Police Department’s Special Victims Unit’s announcement of the new Assault Response Commitment, which aims to increase the likelihood that interpersonal violence incidents are reported to law enforcement, enhance the responses to the survivors and hold offenders accountable. The ten commitments ensure that survivors are treated with respect, sensitivity and understanding. ​ 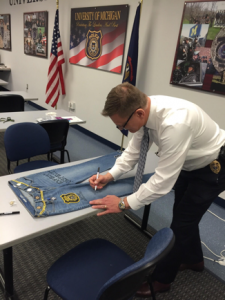 DPSS also will partner with the SafeHouse Center to participate in Denim Day, a national campaign organized by Peace Over Violence on April 26, 2017, which has occurred for the past 18 years to honor SAAM. The campaign originally was triggered by a ruling by the Italian Supreme Court where a rape conviction was overturned because the justices felt that since the victim was wearing tight jeans she must have helped her rapist remove her jeans, thereby implying consent. The following day, the women in the Italian Parliament came to work wearing jeans in solidarity with the victim. Since then, wearing jeans on Denim Day helps build awareness about erroneous and destructive attitudes about sexual assault. Non-uniformed DPSS staff will participate by wearing jeans on this day as a visible means of protest against the misconceptions that surround sexual assault. Uniformed officers will participate by wearing pins. There also will be an information table with denim art on display from April 3-7 in the Campus Safety Services Building lobby.

“When offenders are made known to us, even if no prosecution is desired, that information can prove invaluable to helping protect others.”

In 2015, UMPD organized a Special Victims Unit (SVU) of detectives and other officers dedicated to responding to and investigating sexual assaults, domestic violence, stalking and child abuse reported to have occurred on campus. Officers in SVU have additional training to assist persons making reports of interpersonal violence and can more-effectively support survivors.

“To be successful in this effort we must get the word out that survivors will always be treated with sensitivity, understanding and respect,” Neumann said.

In addition to participating in the campaign, DPSS also will participate in other events open to the campus community in April, including:

Take Back the Night – April 6 at 7 p.m., Michigan Union Ballroom
UMPD SVU officers will participate in the annual march and rally, where survivors and their supporters along with fellow students and community members come together to raise their voices and raise awareness about sexual assault.