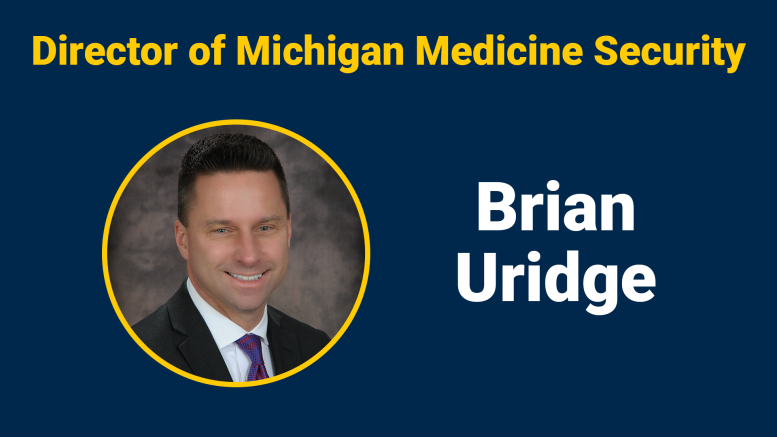 The University of Michigan Division of Public Safety and Security (DPSS) is pleased to announce Brian Uridge as the new Michigan Medicine security director.

“Brian has more than 28 years of experience and leadership in healthcare security services and law enforcement, which makes him uniquely qualified for this role,” said Eddie Washington, Jr., DPSS executive director.

Uridge served for three years as the director of Security Services at Spectrum Health, where he was responsible for more than 200 safety and security professionals. While at Spectrum, he implemented the first four-member security police explosive K-9 unit, who were cross-trained in pet therapy, as well as the first ever Taser and firearm programs. He also was instrumental in the development of a clinical safety program, which used police-based scenario to train more than 3,500 nurses in one year.

Uridge’s leadership at Spectrum led to a consulting position with the Compliance One Group, where he traveled extensively providing training on implementing organizational change in healthcare security and clinical safety environments throughout the U.S. Simultaneously, he also served as the director of public safety and the assistant city manager for the City of St. Joseph, Michigan, a position he will be leaving to take on his new role at U-M.

Uridge earned a bachelor’s degree in criminal justice from Ferris State University and a master’s degree in public administration from Western Michigan University. He began his law enforcement career as a police officer with the Kalamazoo Department of Public Safety, the largest fully integrated police, fire and medical EMS department in the U.S. During his 23-year tenure with the Kalamazoo DPS, he rose through the ranks, retiring as the assistant chief of operations. As the chief of operations, Uridge was responsible for the three largest divisions encompassing criminal investigation, narcotics, police and fire. He spearheaded non-traditional outreach programs and data-driven enforcement, reducing crime by 20% over three years.

“I am honored to have been selected to work alongside such an amazing group of public safety and healthcare professionals at such a prestigious institution,” said Uridge.

We congratulate Brian on his new role and welcome him the U-M community!