The University of Michigan’s Division of Public Safety and Security (DPSS) will host and participate in a number of activities during the month of April to raise awareness about sexual violence in recognition of National Sexual Assault Awareness Month.

DPSS will staff an info table at the 40th annual march and rally, where survivors and their supporters along with fellow students and community members come together to raise their voices and raise awareness about sexual assault. 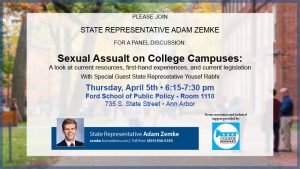 DPSS Police Sgt. Jan Martin-Conners will participate in a panel discussion with State Representative Adam Zemke and other experts on resources, first-hand experiences and legislation related to sexual assault. 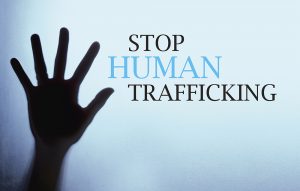 DPSS will co-host a symposium on human trafficking together with the Michigan Medicine Department of Social Work.

DPSS will staff an informational table and with a denim art display on April 25, location TBD.

The Denim Day campaign was originally triggered after a ruling by the Italian Supreme Court where a rape conviction was overturned because the justices felt that since the victim was wearing tight jeans she must have helped her rapist remove her jeans, thereby implying consent. The following day, the women in the Italian Parliament came to work wearing jeans in solidarity with the victim. Peace Over Violence developed the Denim Day campaign in response to this case and the activism surrounding it. This year’s Denim Day is April 25, 2018. Please contact Police Officer Kaitlin Deslatte at  kdeslatt@umich.edu for more information.

If you or someone you kno

w has been sexually assaulted, we recognize that reporting can be difficult. Our Special Victims Unit officers work to ensure that survivors are treated with respect, sensitivity and understanding. UMPD SVU officers Start by Believing and have training in the trauma-informed approach. Our survivor-focused investigative process is designed to better serve the needs of survivors and reduce barriers to reporting.

The University of Michigan conducted a campus climate survey on sexual misconduct during fall 2015, which found that overwhelmingly students report instances of unwanted sexual behavior to a friend, not to official university sources or law enforcement.

“We see one of the biggest challenges for our campus is increasing reporting of unwanted sexual behavior to law enforcement,” said U-M Police Chief Robert Neumann.

“When a survivor comes forward, whether it’s to a friend, doctor, nurse, counselor, or police officer, a negative response can worsen the trauma. We want our community to know that if they come forward with a report it will be taken seriously and addressed compassionately and appropriately,” says Neumann.

In addition, UMPD SVU officers will be participating in notable conferences in April, including:

For more information on Sexual Assault, SVU or Start by Believing, please visit our website.